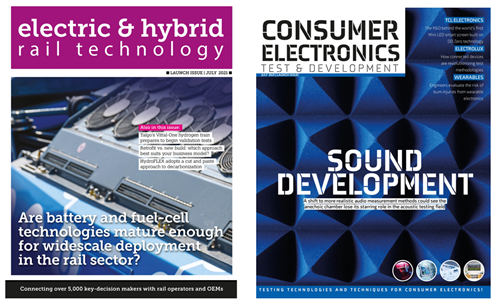 The launch of these two publications falls within MA Business, one of the seven operating companies in the group, which is headed by MD Jon Benson. It demonstrates an increasing focus for MAG on organic growth, in addition to acquisition, which has been a mainstay of the company’s growth over the past decade or so.

The titles were launched by a team headed by group content director Graham Johnson, the former managing director of UKi Media & Events, who joined MAG in January this year.

Johnson said: “Consumer Electronics Test & Development takes us into a new industry. It provides answers and solutions to makers of everyday appliances from fridges to wearable technologies.

“Consumers expect to be able to sit on or drop a mobile phone and it will still work. We need our fridges to operate 24-hours-a-day, seven-days-a-week. People assume a television or gaming console should provide problem-free entertainment for numerous years. If such products fail to deliver, manufacturers of consumer electronics can expect expensive warranty claims or worse, lawsuits!”

He added: “Consumer Electronics Test & Development, which is right now being circulated to more than 10,000 R&D chiefs and testing engineers worldwide, is packed full of case studies, interviews and features that will help manufacturers avoid product failure while at the same time optimising product performance. We’ve been quite overwhelmed by the positive response from the industry.”

MAG plans to publish its new consumer electronics title on a regular basis. It will also be announcing a series of online events culminating in a live international exhibition that will take place in early 2023.

Meanwhile, Electric & Hybrid Rail Technology is also currently being circulated globally. Created at the same time as Consumer Electronics Test & Development, the title taps into the need for the world’s most popular form of transport to clean-up its act. The publication’s launch comes at a time when several governments around the world look to ban short-haul, domestic flights to push travellers onto a greener rail network.

“The success of this launch issue of Electric & Hybrid Rail Technology has taken even us by surprise. Trains lend themselves perfectly to the adaptation of advanced fuel-cell and battery-electric, zero-emission transportation, so we’re helping the rail industry go through its biggest transition since it ditched steam!”, said Johnson.

Johnson confirmed that Electric & Hybrid Rail Technology magazine is also set to spawn regular issues, an online conference as well as a physical international exhibition 18-months from now. Indeed, the launch of these two new brands are just the start of MAG’s planned new-launch programme.

Mark Allen, the executive chairman of the Mark Allen Group, said: “Graham has done a great job in launching these two publications which provide plenty of additional opportunities for spin-offs.”